Our girl is ONE!

One year ago (plus a few days), our precious M came into the world. We celebrated her birthday by giving her a homemade mini banana cherry cake (read: sugar free loaf). I really wasn’t sure how to make her birthday special for her since she obviously didn’t know that it was a special day. BUT, once we started blowing up balloons she got very excited. It was her first time seeing balloons being blown up and she thought it was fascinating.  We also lit a candle and sang her happy birthday. The whole ordeal was very exciting and I was proven wrong. The pictures speak for themselves: 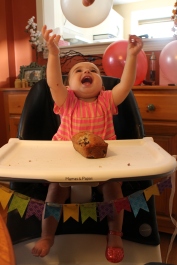 As you can imagine, this year has been an unforgettable one. The transition into parenthood has been like no other. Becoming a mother has changed my perspective and truly added new meaning to my life. Whether M knew it was a special day or not doesn’t really matter – because it was a big day for us. It wasn’t just HER birthday. It was OUR birthday as parents. A huge milestone, and one that made me realize that birthday aren’t just about the birthday girl/boy, but very much about the parents too (not to make everything about myself!), because of all the beautiful changes and new responsibilities that began on that day.

I wrote about M’s big debut here, but there is one part of the story I did not share with you…

Prior to M’s birth, we asked our family and friends if they could light a candle when they received news that we were heading to the hospital. We thought it would be nice to one day share with our daughter that as she was entering this world, dozens of people were thinking of her and praying for her. Also, I must confess that I was terrified of labor and wanted every prayer and positive vibe that I could get. It worked – her arrival was so special, and it was made even more meaningful just knowing that our loved ones were involved in this way. Some of our friends took pictures of their candles and emailed or instagrammed them. Here are a few of the pictures we received:

I love how people added their personal touch to their pictures. It was particularly neat that one friend took a picture in front of the clock which read 11:27 because M was actually born at 11:26! It was touching for us to know that friends near and far were with us in spirit.

Many of us have heard the phrase “it takes a village to raise a child”. One of the reasons we chose to ask people to light candles was because of our belief in this idea. We wanted those around us to know that because of their involvement in our lives, the would automatically have a role (should they want it), in our daughter’s life – right from the beginning. Now that a year has gone by, we can confirm that community is invaluable (more on this in another post!).

We’re thankful for a year in our daughter’s life, and can’t wait to see what the next one brings! Happy birthday M!