← Picture of the Week – Amato Pizza & Good Food in the T-dot
Yoga on the hill and some thoughts about freedom and rules.. → 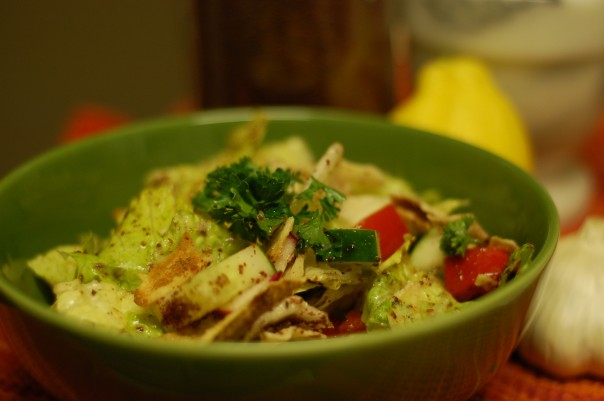 So, in keeping with my ongoing fetish for Lebanese food and culture, I have recently developed a more specific fetish – for fattoush. Yes, that’s right, a fetish for fattoush.

What is fattoush you ask? It is a delicious salad made from greens and toasted or fried pita bread.  The special ingredient, which makes it taste different than other salads you may have had, is sumac – a spice used in the Middle East which adds a bit of a lemony taste. You will love it!

Since my little fetish has started to become an expensive one because I am constantly going to Lebanese restaurants for a quick fix, I recently decided that the time had come for me to make some homemade fattoush.   It is actually quite easy to make and the  only tip I have is to not overdo it with the sumac. Be  somewhat generous, just not overly generous. Contrary to what I had previously thought, it is possible to have too much sumac. 🙂

This recipe is adapted from one taken from one of my favorite Lebanese food blogs – Taste of Beirut.  Enjoy!

4.  2 or more cloves of garlic mashed in a dash of salt in a mortar

1.  Brush the pita bread with oil and sprinkle plenty of sumac on top

2.  Toast in a 325 F oven until the bread is crispy and golden – break into small pieces and set aside *Note – if you forget to brush with olive oil and sumac – you can just mix the bread in with the salad later and it will absorb the dressing and sumac*.

3.  Prepare all the salad ingredients; mix the dressing; when ready to serve, toss the salad with the dressing and mix in the pieces of pita bread.

← Picture of the Week – Amato Pizza & Good Food in the T-dot
Yoga on the hill and some thoughts about freedom and rules.. →