More than other years, it seems that there is so much to reflect on since this is the last year of my 20s.

I’m the type of person who reacts to birthday milestones a little prematurely. Turning 24 was a big year for me because I was almost 25 but turning 25 wasn’t such a big event because I had already internalized it the year before. Now, since 29 is proving to be a big year for me, I anticipate that next year will not be too much of a shock.

Though I’m not a huge birthday person, I do feel the need to mark each passing year of my life in some way. This year, I entered my 30th year in a big hug with my husband. As we hugged and the clock turned to midnight, I thanked God for all he has brought me in my life in general, but especially in the past year and the past decade. As I begin a new chapter, I am conscious of all the wonderful things that I am blessed with.

In this past decade I started and finished 3 university degrees; I started and ended a relationship, which was probably one of the biggest journeys into self-discovery that I have ever experienced; I met and married my husband and wonderful life partner, which has been an incredibly intense and rewarding experience; and I held a number of jobs which all contributed both to my personal and professional development and through which I have met some of the people who are today my best friends (you know who you are!). I’ve also been blessed to have traveled and seen so much of the world while also meeting new people and experiencing different perspectives on life. Among the many travel highlights were the time I swam in the bioluminescent bay in Puerto Rico, meeting my sponsored child and going on safari in South Africa, as well as our 1 month honeymoon in a beautiful and remote Italian mountain-top village. Oh, there have been so many memories. I’ve also taken up new hobbies, one of which is writing this blog (thank you for joining me on that one).

Thinking back on all of these experiences makes me realise that what I take from them are not only the memories, but how they have helped me to discover so much about myself and the world around me. This decade has taught me above all to become comfortable with and excited about who I am and where I want to go. I have learned to face my fears and bounce back from pain and heartache. I have learned the importance of having fun while also being wise and intentional.

This morning, J told me that 29 was a wonderful age because I have the knowledge of who I am while still being young and being able to do all of the things that young people do. I think he’s right and I intend on enjoying and taking in every minute of this year (the good and the bad).

20s, you’ve given me a lot and I’ve really enjoyed you; I’m going to miss you when we part ways next year but I’m almost starting to be ready to meet 30s. Here’s to our last year together – I know it will be special.

Posted in Food for thought, Inspiration

I really like cauliflower but until a few days ago I couldn’t really say that I had a ‘go-to’ cauliflower recipe.  I sometimes throw it into salads and last year I made a really good Thai red curry chicken soup with it, but other than that, nothing special sticks out in my mind.

I recently came across this recipe and wanted to try it right away.  Having run out of cumin a few days earlier, I decided to experiment with turmeric.  I was pleasantly surprised with how well the lemon, turmeric and sumac flavours blended together. The result a deliciously tart yet warm roasted cauliflower dish.  I think you will enjoy.  Here is the recipe, which is a slightly modified version of the one I mentioned above, replacing only the cumin with turmeric.  Enjoy!

In a large bowl, combine the cauliflower, olive oil, lemon juice and zest, cumin, sumac and garlic powder. Toss with your hands or a wooden spoon so that everything gets evenly combined. Dump onto a cookie sheet prepped with a silpat mat or parchment paper and sprinkle with salt and pepper. Bake for 30 minutes, flipping cauliflower over at the 15 minute mark. When everything is golden brown and crispy, remove from oven. Serve with additional lemon quarters for that added lemony bite.

Posted in Food for eating

Making Peace with the Past

Last week I had the privilege of attending the Canadian Truth and Reconciliation Commission’s (TRC) Atlantic National Event in Halifax.  Survivors of the Canadian government’s residential school program, which ran roughly from the 1870’s to the 1990’s, came forward to give their accounts.

To give you a bit of a background, the Residential School program was created with the intention of assimilating First Nations people into European-Canadian society.  The residential school system separated children from their parents, taking them away to boarding schools in an effort to distance them from their cultures.  The children were forced to speak only English and were beaten (or worse) if they did not comply or made attempts to escape. This effort to force assimilation has been described as “cultural genocide”.  The stated goals of the residential schools were to “civilize” the Aboriginal people.

The Truth and Reconciliation Commission of Canada was entrusted with the mandate of bringing the truth about what happened in these schools to light, as well as passing on these truths to all Canadians. According to the TRC’s website, there are an estimated 80,000 former residential school students living today.  In addition to this, the TRC notes that the impact of these schools is ongoing and has been a contributing factor with regards to many of the current social issues experienced by First Nations in Canada.

In my experience, Canadian media seems to focus much more on the social problems in First Nations communities than on the historical factors that have either caused or contributed to these problems. Now that I have learned a bit more of the story, I feel as though the narrative I’ve been fed about these communities is incomplete and entirely one-sided.

Last week I was able to experience the inter-generational impact of the residential school program.  I sat down and listened to survivors and their children talk about how they have been affected. I heard stories about people who were beaten and molested merely for daring to speak their own language.  I also heard accounts from the children of survivors who are unable to speak the language of their community and who have also been affected by the psychological impact that this type of treatment had on their parents. Not surprisingly, these effects are being passed on even to the third generation.

While it brings me hope that Canada is doing what it can to acknowledge the wrongs of the past and attempting to bring about reconciliation, what strikes me most deeply is how long, arduous, and painful this process will be.  At best, it may take another three generations before the effects subside.  Also, as the TRC has acknowledged, we will have to find a place to fit Justice in between Truth and Reconciliation, perhaps even as a bridge between the two.

A while back, I wrote about about becoming a contributor to society and about inheriting the mistakes of previous generations. Coming to terms with and addressing the effects of the residential school program is a classic example. As a new generation of Canadians, we must do our best to guard against the reoccurence of such tragedies. You can go here to read more about the residential school program and the Canadian Truth and Reconciliation Commission.

Posted in Culture, Food for thought

Picture of the Week – The Fruits (er, veggies) of my Labour 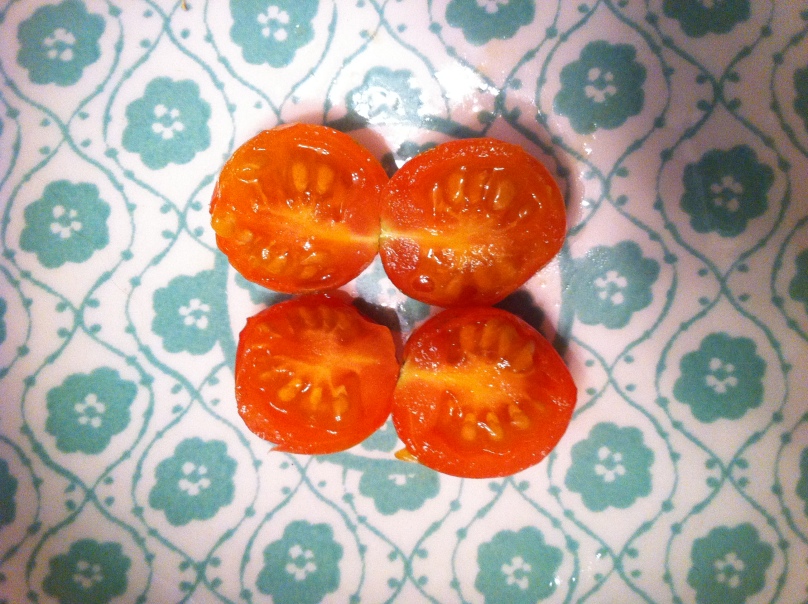 A little while ago I told you about my tomato plant.  Update: we have tomatoes and I’m thrilled!

Posted in Food for eating, Inspiration, Photography, Picture of the week